Mama Odie (Disney’s The Princess and the Frog) transforms her pet snake into various animal forms. 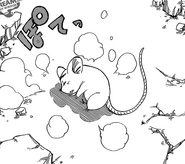 Eileen Belserion (Fairy Tail) can turn other people into animals, such as when she transformed Princess Hisui into a mouse.

John Constantine (Arrowverse/DC Comics)
Add a photo to this gallery
Retrieved from "https://powerlisting.fandom.com/wiki/Animal_Transmutation?oldid=1248090"
Community content is available under CC-BY-SA unless otherwise noted.