The power to create weapons from animals. Sub-power of Organic Constructs. Variation of Organic Weaponry.

User can create or use weapons made from most often living animals or animal-like alien. Depending on the organism the weapon is made of, it can posses a variety of abilities and be very effective in both offensive and defensive combat.

A Savage Boomer (Gears of War 3) armed with a Digger Launcher.

…in addition to seemingly being able to summon a firearm from bees.

Banjo (Banjo-Kazooie) can use his bird friend Kazooie as a billy club...

Funkfreed (One Piece) transform into sword.

The white murloc (WOW/Hearthstone) holding a fish as a weapon.

Weiss Schnee (RWBY) using a swordfish as a literal swordfish.

Murky (Heroes of the Storm) 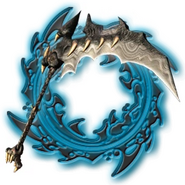 Eclipse Scythe (Ninja Gaiden) is the prized weapon of the Lycanthrope Fiends, being forged from Wootz Steel mixed with the body of a Werebeast Lord.
Add a photo to this gallery
Retrieved from "https://powerlisting.fandom.com/wiki/Animal_Weaponry?oldid=1512167"
Community content is available under CC-BY-SA unless otherwise noted.