Xerneas (Pokémon) is a legendary Pokémon that can harness the powers of life itself.

Utilize magic revolving around the life-force.

"The most important thing is to enjoy your life—to be happy—it's all that matters."
― Audrey Hepburn

The power to utilize magic involving the living, life-force and/or souls. Form of Magic. Magical variation of Life-Force Manipulation. Opposite to Necromancy. Practitioners of this trade are known as Animancers.

The user's magical abilities revolve around manipulating the living, life, the life-force, and life forms. Users can create new forms of life, grant life to the lifeless, animate things, manipulate the life force of the universe and those connected to it.

Many practitioners find a way to make peace with idea that death is everywhere and that life and death are both inevitable forces and can't exist with out the other. Practitioners also have the potential to create or find new ways to bring new life in existence, either by animation, evolution, any way possible.

The Power To Give Life.

Zeref Drageel (Fairy Tail) has done immense magic research on Animancy, allowing him to create tens of thousands of Demons and even resurrect his dead brother Natsu as his strongest Demon.

Valerie Tepes (Highschool DxD) is the wielder of the Longinus Sephiroth Grail which has the power to control the principle of life.

After receiving power from the Sage of the Six Paths, Naruto Uzumaki (Naruto) gained the ability to use Six Path Yang Release to stabilize life-force and restore missing organs through physical contact. 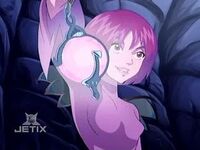 Theurges (Wizard 101) are wizards and witches from the School of Life, their specialties versed around life magic.

The Holy Grail of the Secluded World: Sephiroth Grail (Highschool DxD) is a Longinus that can control the principle of life, capable of life giving miracles, such as limitation transcendence, resurrection, regeneration bestowal, and life renewal.
Add a photo to this gallery
Retrieved from "https://powerlisting.fandom.com/wiki/Animancy?oldid=1721838"
Community content is available under CC-BY-SA unless otherwise noted.