As the Shadow Monarch, Sung Jin-Woo (Solo Leveling) can create Shadow Soldiers from the souls of the dead to serve and fight for him.

"There were shadows in the place. I don't mean the monsters, I mean real shadows, of people. Only there was no one there to cast them. They were coming from the hearts. A new one appeared at the same time as the hatching monster, and started trying to pull away, but it couldn't."
― D-14134 describing SCP-1983 (SCP Foundation)

The power to bring shadows to life. Sub-power of Darkness Manipulation. Not to be confused with Shadow Reanimation.

The user can transform their or other's shadows into living beings. As the rule of anything happening to the real body happens to the shadow, this ability may allow the user to manipulate the shadow and cause damage in reality by using it to attack. This means anything that happens to the shadow will be reflected in the true body; in short, a form of "reverse" shadow puppetry. 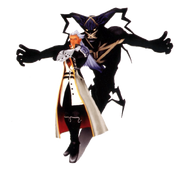 Shu (Blue Dragon) and his comrades can transform their shadows into ferocious beasts.

Peter Pan's (Peter Pan) shadow has a mind of its own.

Gekko Moriah (One Piece) can animate his own shadow as well as capture and command others thanks the power of Kage Kage no Mi.

Rui Hachiouji (Code:Breaker) can animate her own shadow to attack others, and even merge with it for a boost.

Saechika (Code:Breaker) can animate his own shadow to attack others, or form cages and chains for capture.

Noob Saibot (Mortal Kombat) can animate his own shadow into a semi-liquid physical construct of himself to aid him in the fights.

Hoichi (Naruto) uses the Dharma Power: Silhouette to animates an opponent's shadow, forcing it to strangle and suffocate the target.

Fumikage Tokoyami (My Hero Academia) possesses the quirk "Dark Shadow", which allows him to summon his shadow as a creature to fight for him. The more light there is, the more passive it is... 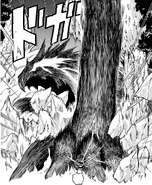 ...the darker it is, the more savage and uncontrollable it becomes. 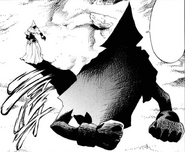 Nature ÄRM, Shadowman allows Ash (Marchen Awakens Romance) to enlarge his shadow and have it fight for him. As a bonus, the shadow can harmlessly absorb attacks meant for Ash.

Johnny 13 (Danny Phantom) has a shadow that can project bad luck and has a mind of its own.