Use the traits of animatronic.

The power to use the abilities of animatronics. Variation of Bionic Physiology and Inanimate Object Physiology. Not to be confused with Zoo-Mechanical Physiology.

User with this ability either is or can transform into animatronic, machines that may seem more organic than inorganic because they have a convincing appearance or perform actions that seem to be natural. They may have animal inspired designs and characteristics.

Zeke (Zoids) is an animatronic dinosaur. 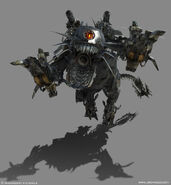 Driller (Transformers) is an animatronic tapeworm from the cybertonian wildlife.

The Animatronics (Five Nights at Freddy's)

Robot horse (Kim Possible)
Add a photo to this gallery
Retrieved from "https://powerlisting.fandom.com/wiki/Animatronic_Physiology?oldid=1689863"
Community content is available under CC-BY-SA unless otherwise noted.