Develop wings around the ankles.

The power to have or produce ankle wings. Variation of Wing Manifestation.

User has or is able to manifest wings on their ankles, primarily used for flight but they also enable enhanced speed, balance and agility. 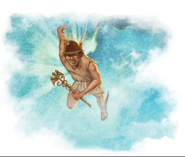 Hermes (Greek Mythology)
Add a photo to this gallery
Retrieved from "https://powerlisting.fandom.com/wiki/Ankle_Wing_Manifestation?oldid=1499591"
Community content is available under CC-BY-SA unless otherwise noted.