The Darkness/Amara (Supernatural) is god's polar opposite.

"I howl through many mouths. I break with many hands. They are themselves, but they are also me. I have all the power you give me and my weapon is hate."
― The One Below All (Marvel Comics)

"In my dream, the world had suffered a terrible disaster. A black haze shut out the sun, and the darkness was alive with the moans and screams of wounded people. Suddenly, a small light glowed. A candle flickered into life, symbol of hope for millions. A single tiny candle, shining in the ugly dark. I laughed and blew it out."
― Joker (DC Comics)

"He is the cosmic conqueror, the destroyer of worlds. A being of infinite power and endless hunger on a quest to invade every universe and bring all worlds into his Dark Dimension."
― Wong (Marvel Cinematic Universe)

"Violent passion, for a fraudulent god who gave a vicious curse."
― The Enigma TNG - God Complex

"He's like the devil, isn't he?
"No, he's worse."
― Jake Chambers and Roland Deschain (The Dark Tower)

The power to have traits and powers of an Anti-God. Variation of Transcendent Physiology. Destructive variation of Omnipotence. Opposite of Monotheistic Deity Physiology.

User is the Anti God/Primordial Void, representing the counterpart or sometimes the dark aspects of a Supreme Deity. They are considered the essence of all evil, darkness, and chaos in existence. As the ultimate destroyer, they are ranked among the most powerful entities.

Anti-Gods are beings of unlimited power giving them the ability to destroy entire universes; in some cases even compared to the supreme creator, a clash between them could cause the multiverse to be destroyed and recreated. Anti-Gods represent and are the prime originators of all that counters creation, giving it absolute domain over dark powers. 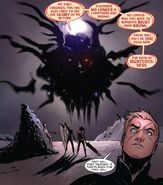 Amatsu-Mikaboshi (Marvel Comics) was a mere aspect of Oblivion.

The Black Mass (Samurai Jack) is the original being that Aku originated from.

Angra Mainyu (Valkyrie Crusade) is the anti/evil god, the supreme/absolute evil that exists only to destroy all of existence.

The Darkness (Supernatural) is God's older sister, and predates everything, including God and Death. Her power is such that not even the combined might of her brother God and his Archangels could destroy her.