Nemesis Kid (DC Comics) is able to create the perfect counter effect for another person's powers.

User can manipulate anti-powers, or powers that counteract other powers that another person may have. With this power, the user can cancel other powers, as well as erase or destroy them, and more.

Even a powerful martial artist like Karate Kid is powerless against Nemesis's ability. 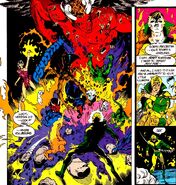 Leech (Marvel Comics)
Add a photo to this gallery
Retrieved from "https://powerlisting.fandom.com/wiki/Anti-Power_Manipulation?oldid=1511213"
Community content is available under CC-BY-SA unless otherwise noted.