Be unaffected by storage powers.

The ability to be immune to any imprisonment abilities.  Variation of Immutability. Opposite to Absolute Storage, Sealing, and Binding.

User cannot be absorbed, sealed, consumed, banished, imprisoned or affected by any type of storage power. In some cases users are too big to be contained others can just cause indigestion or overloading. 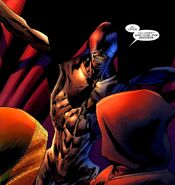 Clyde Wyncham Jr./Marquis of Death (Marvel Comics) is virtually impossible to contain, even in the omega box, which is used to seal away omega level threats.
Add a photo to this gallery
Retrieved from "https://powerlisting.fandom.com/wiki/Anti_Storage?oldid=1364597"
Community content is available under CC-BY-SA unless otherwise noted.