The ability to fuse physical combat with antimatter. Technique of Antimatter Manipulation. Variation of Combat Merging and Universal Force Combat.

The user is able to use their Antimatter Manipulation with their physical combat skill, channeling antimatter through parts of their body or use the antimatter for defensive purposes. 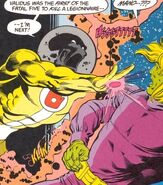 Adam Brashear/Blue Marvel (Marvel Comics) firing off a beam of anti-matter energy.
Add a photo to this gallery
Retrieved from "https://powerlisting.fandom.com/wiki/Antimatter_Combat?oldid=1499641"
Community content is available under CC-BY-SA unless otherwise noted.