The Armageddon Blade (Darksiders) was created to destroy the Seven Seals of the Apocalypse, kickstarting said Apocalypse prematurely.

Known to the Killiks as Qolaraloq or the World Puller, Centerpoint Station (Star Wars Legends) was capable of moving entire planets with its tractor beams.

A class of Imperial Super Star Destroyer manufactured by Kuat Drive Yards, the Eclipse-class dreadnought (Star Wars Legends) carried an axial superlaser, similar to but significantly less powerful than one of the component beams used in the Death Star's superlaser. 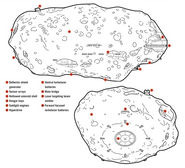 Constructed at the behest of Emperor Palpatine during the second year of the Galactic Empire, the Eye of Palpatine (Stars Wars Legends) was a colossal, asteroid-shaped super dreadnaught. 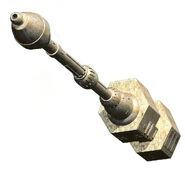 The Imperium (Warhammer 40,000) can authorize use of Exterminatus weaponry, which can erase all life on a planet. 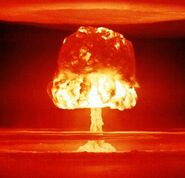 Nuclear Weaponry is among the most powerful and destructive known weapons humanity has ever created, capable of ending current civilization if used in full-scale war.

the Tsar Bomba was the most powerful nuclear weapon in history, making it apocalyptic even among an already society-ending arsenal of weapons.

Furon Saucers (Destroy All Humans) have an immense amount of power, capable of destroying cities..

..which is taken to even greater extremes with the Quantum Deconstructor, which will wipe out anything in its range.
Add a photo to this gallery
Retrieved from "https://powerlisting.fandom.com/wiki/Apocalyptic_Weaponry?oldid=1573314"
Community content is available under CC-BY-SA unless otherwise noted.