Having eaten the Hana Hana no Mi, Nico Robin (One Piece) can replicate and sprout parts of her body on the surface of any object or any living thing, allowing feats such as growing additional arms.

"Never trust something with an odd number of limbs."
― Catharsis

The ability to generate extra body parts, either on one's body or other surfaces. Sub-power of Body Manipulation and Limb Manipulation. Opposite to Atrophy.

The user has or can generate body parts, such as arms, legs, mouths, eyes, etc., on themselves, others or any other surface. When used on oneself and others, this ability can be used to manifest extra body parts, create appendages foreign to the subject’s normal physiological structure, or to potentially even replace lost anatomy. 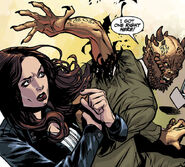 Kuurth (Angel & Faith) sprouts a third arm on his back. 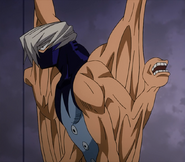 Mezo Shoji (My Hero Academia)'s Quirk Dupli-Arms allows him to to replicate enhanced versions of any part of his body.

The T-1000 (Terminator) sprouts two extra arms to both pilot a helicopter and use its weapons.