Use the traits of an Apsara

The ability to use the abilities of an Apsara. Variation of Hindu Deity Physiology and Nymph Physiology.

User with this ability either is or can transform into an Apsara, female spirit of the clouds and waters in Hindu and Buddhist Mythology and handmaidens of Indra, said to be able to change their shape at will, and rule over the fortune of gaming and gambling. They acted as celestial dancers at the court of the gods who entertained and sometimes seduced gods and men as well as acted caretakers of fallen heroes. 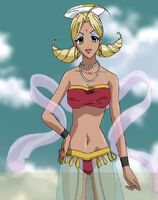 Miss Apsara (Rosario + Vampire)
Add a photo to this gallery
Retrieved from "https://powerlisting.fandom.com/wiki/Apsara_Physiology?oldid=1673914"
Community content is available under CC-BY-SA unless otherwise noted.