The power to perform arachnid-related magic. Form of Magic. Variation of Arachnid Manipulation and Animal Magic.

The user can use magic to control arachnids, transform themselves or others into arachnids, mimic animal traits and summon/create arachnids spirits and/or arachnids. They can communicate with arachnids, borrow their senses, possess them and otherwise use arachnids as extensions of themselves. 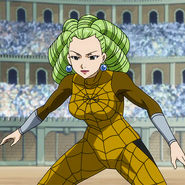 Widow (Sailor Moon)
Add a photo to this gallery
Retrieved from "https://powerlisting.fandom.com/wiki/Arachnid_Magic?oldid=1243716"
Community content is available under CC-BY-SA unless otherwise noted.