The One Below All (Marvel Comics) is the dark alter-ego of The One Above All, who act as the ultimate personification of destruction and hate as well as The inevitable end of all things.

"I howl through many mouths. I break with many hands. They are themselves, but they are also me. I have all the power you give me and my weapon is hate."
― The One-Below-All (Marvel Comics)

"In my dream, the world had suffered a terrible disaster. A black haze shut out the sun, and the darkness was alive with the moans and screams of wounded people. Suddenly, a small light glowed. A candle flickered into life, symbol of hope for millions. A single tiny candle, shining in the ugly dark. I laughed and blew it out."
― Joker (DC Comics)

"Violent passion, for a fraudulent god who gave a vicious curse."
― The Enigma TNG - God Complex

"You cannot save yourself from me. I am as inevitable as destiny."
― Unicron (Transformers)

The archetype for the characters that possess or have traits of the Anti-God. Variation of Transcendent Physiology. Form/Expression of Omnipotence. Ultimate version of Evil and Malevolent Deity. Opposite of Monotheistic Deity.

As an archetype, the Anti-God represents the counterpart and/or sometimes the dark aspects of The Supreme Being. They are considered the essence of all evil, darkness, and chaos in all of existence. As the ultimate destroyer, they are ranked among the most powerful beings.

Anti-gods are beings of unlimited power giving them the ability to destroy entire universes; in some cases even compared to the supreme creator, a clash between them could cause the multiverse to be destroyed and recreated. Anti-Gods represent and are the prime originators of all that counters creation, giving it absolute domain over dark powers.

Apophis/Apep (Egyptian Mythology) was the primordial Embodiment of Chaos, the incarnation of all evil, and the arch-nemesis of Ra, the sun god. Every night Apep would attempt to devour Ra and bring about the end of the world, and every time the other gods would fight it off, even Set.

The Black Mass (Samurai Jack) is the cosmic horror that Aku spawned from, after its main body was destroyed by the combined might of Odin, Ra, and Rama.

The Darkness (Supernatural) is God's sister. Her power is such that only the combined might of her brother God and his Archangels could defeat her. 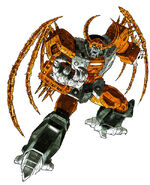