The Antichrist figure, a dark reflection of the Messiah.

"My name is Danny Wormwood, and I'm the Antichrist. How I ended up with a rabbit is beyond me."
― Danny Wormwood (Chronicles of Wormwood)

The archetype for the characters that possess, or have traits of the Antichrist.

The user is the Antichrist, a darker messianic archetype associated or aligned with malevolent forces; commonly viewed or portrayed as an avatar who is born from satanic origins who represents or is associated with The Devil as his incarnation or physical manifestation on earth, yet the designation isn't exclusive for demonic sources. Antichrists are extremely dangerous and are fundamental as bringers of the Apocalypse.

Damien Thorn (The Omen) is the Antichrist; Satan's human form. 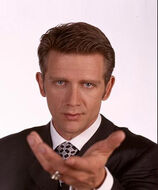 Nicolae Carpathia (Left Behind) is the Antichrist, with the soul of the Devil himself within him granting him all evil power.

Damian (Zoophobia) is a hellhound, antichrist and prince of hell.
Add a photo to this gallery
Retrieved from "https://powerlisting.fandom.com/wiki/Archetype:Antichrist?oldid=1682436"
Community content is available under CC-BY-SA unless otherwise noted.