Lilith (Mythology), Dark Goddess of the Moon, the Night, Magic, Sexuality and Fertility, Mother of Demons and the First Woman.

The Dark Mother, is a dark reflection and variation of the Mother Goddess.

The archetype for the characters that possess or have traits of the Dark Mother. Variation of Dark Divinity and Mother Goddess Physiology. Not to be confused with just Malevolent Deity Physiology.

As an archetype, the Dark Mother is a powerful female divinity, Goddesses that represents life, death, earth, the night, sexuality, and deep magical energies, and she comes in many forms. She has also been seen as demonic/divine demonic like Lilith, however this is not all of the dark mother figures. Dark Mothers have also been associated with nurturing, birthing, children, the sick, the elderly, the dead and the dying. Her image appears in all cultures: African, Hindu, Christian, Egyptian, Greek, Roman, and countless other cultural and religious sources.

The Dark Mother has also been called the Dark Maiden or Matron depending on the physical looking age of the goddess.

Unlike her supposed dark counterpart the Dark Father, they actually couldn't be further apart in their goals and agendas, having nothing to do with each other as the dark mother isn't always an evil figure like the name would suggest. In most cases it implies to her underworld status or for her somewhat harsher nature and even for her use of the dark arts.

Echidna (Greek Mythology) is the mother of monster in greek mythology.

Kiara Sessyoin (TYPE-MOON) is a human transformed into a mother goddess who has given birth to multiple demon gods.

Sakura Matou (TYPE-MOON) was altered from a young age to become the mother of Angra Mainyu, the embodiment of All the World's Evils. 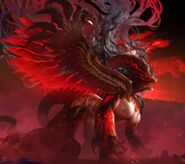