Some of the most infamous Japanese Manga yankii characters.

"Huh?!"
― A common saying for the typical Japanese Delinquent

"He-llo? Could you say that again? More slowly? In a language I understand? Depending on what you said, I might kick your ass!"
― Joseph Joestar (JoJo's Bizarre Adventure Part II: Battle Tendency)

"Hey, don't go treating me like a snot-nosed brat, Toriko. You're a blood-covered brat running wild in a jail. I came all this way to get you, so behave yourself. If you don't like it, I'd be Happy...to make you my stress relief. C'mon. Let's Fight. Oh Yeah?"
― Zebra and Toriko (Toriko)

"Don't Get Cocky. One thing I hate...is guys who get carried away and cocky. Just lookin' at 'em makes me want to crush their skulls...and pulverize 'em into dust!."
― Zebra to Komatsu (Toriko)

The archetype of a delinquent.

The character is a delinquent, usually a young person, who regularly performs acts that are considered illegal or immoral acts within society such as fighting among each other or against other people and groups, stealing, smoking cigarettes, and other activities relating to crime.

In his younger days, Yami Sukehiro (Black Clover) was somewhat of a delinquent as he frequently beat the crap out of anyone who targeted him for bullying due to his status as a foreigner in the Clover Kingdom or for his unique Dark Magic abilities. 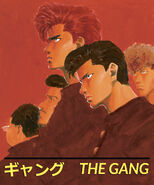 Josuke Higashikata (JoJo's Bizarre Adventure Part IV: Diamond is Unbreakable) redefine and popularized the delinquent archetype with his inception thanks to his creator, Hirohiki Araki seeing real-life Japanese delinquent for who they really are and changed their public reception by basing Josuke around a deeper understanding of their positive traits.

Zebra, the Delinquent of the Four Kings (Toriko)