Descending from a long line of knights since the days of King Arthur and Merlin, Dane Whitman (Marvel Comics) is the presented day Black Knight.

The archetype for a character who is a knight. Variation of Soldier.

There are many interpretations of a knight. From a dragon-slaying knight in shining armor to the medieval soldier fighting for glory or country, and to the princess's personal guard. A knight is an honorary title bestowed onto someone by a monarch or kingdom's rulers. They wear medieval European armor and can wield a variety of weapons. Most commonly a sword, flail, mace, etc. Knights were a prestigious warrior class. They lived by the code of chivalry. Knights competed with each other in sport such as jousting.

The age of the knights started in the 4th century and ended in the 16th century. To become a knight, 7-year-old boys born of nobility would be sent to castles to become pages. The page would then become a squire at age 14. Squires trained with swords and shields. They learned how to move in armor, chivalry, and warfare. Squires could head into battle to assist knights. They also learned how to ride horses. At age 21, during the accolade, squires were granted knighthood. 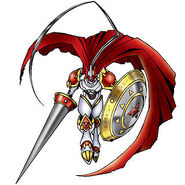 The Knights of Astoria (Knight Squad)