Sir Lancelot and Queen Guinevere's (Arthurian Legend) tragic forbidden love would cause the fall of Camelot.

The ability to use the powers and characteristics of the lover archetype.

The user is a Lover: an innately loving and sexual person who happily engages in having a sexual and/or romantic relationship with someone in and/or outside marriage. These kinds of people are by nature inherently sexual and loving beings that they follow their nature in having sexual and romantic activity with their partners for the pursuit of happiness, love or just for pleasure, whether it is on an exclusive basis or not, or engage in the sexual activity on a casual basis with sexual partners with consensual, sexual and intimate relationships, be it other lovers or even friends with trust or commitment. A lover can engage in monogamous or non-monogamous relationships with their current or with other partners at any one time, all depending on them and how much they trust one another. True lovers stand out and share respect for their loved one they have in their hearts, truly and mutually committed by heart, being willing to sacrifice themselves and aid each other out of pure love.

Kurumi Tokisaki (Date A Live) loved Shido extremely dearly, to the point she time-traveled countless times desperately to save him from inevitable death.

Basara Toujou and Mio Naruse (Shinmai Maou no Keiyakusha) held tremendous love for each other, their bond is so indomitable they have prevailed over the greatest dangers through their undying love for each other.
Add a photo to this gallery

Laura and Massimo (365 Days) despite their first time meeting, they grew to love and lust for each other as soulmates.

Scott McCall (Teen Wolf) even in high school has always had a romantic heart for his lovers...

... and finally Malia Tate who grew from friend to lover.

Stiles, and Lydia (Teen Wolf) had their first spark of real love their first kiss despite her reason for kissing him...

... a romance that slowly developed...

... until they finally embraced their unyielding romance and passion for each other.

Charlie and Claire (Lost) despite their flaws they would always love each other even when they died they were reunited.

Will Scarlet's (Once Upon a Time in Wonderland) love for Anastasia was so strong and true that he could break Jafar's love spell.
Add a photo to this gallery 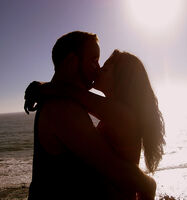 Love, an indomitable force no one can deny.

Regardless of who she chose, Cardia (Code Realize Series) will always be there to protect the man she loves with unbreakable determination such as Abraham Van Hellsing.

Though they originally commited adultery for casual sex, as their affair continued, Yusuke Yagami's Mother and the Mysterious Gentleman (Gibo) officially became lovers as they genuinely fell in love with each other. 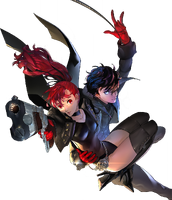 Joker (Persona 5 Series) is a devoted lover to any of his possible romantic love Confidants such as Sumire Yoshizawa.
Add a photo to this gallery
Retrieved from "https://powerlisting.fandom.com/wiki/Archetype:Lover?oldid=1694003"
Community content is available under CC-BY-SA unless otherwise noted.