"But the LORD is the true God; He is the living God and the everlasting King. At His wrath the earth quakes, And the nations cannot endure His indignation."
― Jeremiah 10:10 (The Bible)

"I am the true God, the embodiment of the wheel of life, the Spinner of all Mantra."
― Chakravartin (Asura's Wrath)

The archetype for characters who are the Supreme Being. Variation of Transcendent Physiology. Form/Expression of Nigh-Omnipotence and Omnipotence. Opposite to Anti-God. Not to be confused with just Supreme Deity.

The user can transform or become a monotheistic deity, one supreme transcendent being that created and rules over absolutely everything. They have complete, absolute power and unquestionable authority over all things in creation and beyond, they are literally God, the strongest and most powerful being in all of existence.

As an archetype, the Supreme Being represents the ultimate in power and dominance in the universe shown in most cases as a compassionate and benevolent being/entity/spirit who is all-powerful, all-knowing, and everywhere, also often the creator of the universe/s and everything in it/them since the Supreme Being in question is believed by followers to be the driving force behind all of existence.

In some cases, the Supreme Being also comes in many forms over many different cultures and realities, with his most common form as that of a wise elder humanoid male. However, this is not always the case, with the Supreme Being appearing as a female humanoid type, a Goddess if you will, or a type of animal, or even formless since it is an all-powerful being it can be whatever it wants anywhere it wants.

See Also: God and Above The Gods.

Beyonder (Marvel Comics) before his retcon he was described as God before there was Genesis. 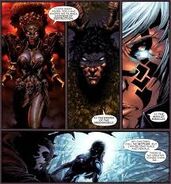 The Mother of Existence/Man of Miracles (Spawn/Image Comics) is the supreme creator of the Image verse and there is no power greater than s/he. 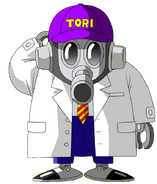 Chuck Shurley was originally the One God of the "Supernatural Multiverse"…

…until Jack absorbed both God's and Amara's power from Chuck thus becoming the new God of said multiverse, making him the most powerful entity in existence.

The Great Reason (Shin Megami Tensei) also known as The Axiom, is the binding force of the universe, from which everything originates, and will eventually return to. Existing beyond time, space and the infinite cycle of transmigration, it is a fully unknowable entity, and the True Supreme Being of the Megami Tensei Series. Though YHVH, the God of the Covenant, believes to be the One True God, he is in truth only a rogue avatar / aspect of The Axiom, the true source of existence.

Azathoth (Cthulhu Mythos) is the primordial creator, lord, master and governor of existence and the outer chaos that serves as the residence of The Outer Gods, who resides on a black throne at the centre of the Abyss, from which he rules all of time and space, lying in a seemingly dormant state while his subjects mindlessly dance around it, playing cacophonic, discordant music for their Master for reasons yet unknown, while the Daemon Sultan himself gnaws and mutters his own dreams, which lie beyond even his own understanding.

God (Unsong) is the supreme being of Unsong, being an unknowable cosmic force whose emanations of Divine Light gave birth to all of existence, as well as myriads of other Universes in the paradisiac garden beyond existence which He governs and rules over, with all things being sustained by His essence that permeates throughout them.

The Emperor Beyond The Sea (The Chronicles of Narnia)

God (Christianity) is The Supreme Being; The Creator and Ruler of Existence; The Self-Existent One who is perfect in power, goodness, and wisdom.

Para Brahman (Hinduism) is “The Supreme Brahman” revered as the supreme and absolute state of being in Hinduism.

At least during Pharaoh Akhenaten's rule, Aten (Atenism) is the Monotheistic God in Atenism, and is also responsible for creating and ruling all of reality as a whole.

Sam Howell/SCP-3812 - A Voice Behind Me (SCP Foundation) will become the author/supreme being of all after transcending everything.
Português do Brasil
Community content is available under CC-BY-SA unless otherwise noted.
Advertisement