"Remember...A true samurai does not look for a fight...but tries to avoid it."
― Katsuichi to his student, Miyamoto Usagi (Usagi Yojimbo)

The archetype of a samurai without a master. Combination of Archetype:Samurai and Archetype:Avenger.

Ronin are a class of masterless samurai who are created when they face dishonor and failed to commit seppuku or when their lord and master is slain or they never had one to begin with. Certain ronin will often seek revenge and desire avenge their fallen masters, but the majority often become wanderers, vagabonds, shugyosha (student warriors), assassins, and bandits. Those who want or are in need of employment, will either become mercenaries or yojimbo (bodyguards). 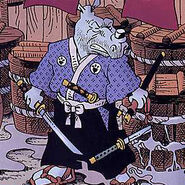 Samurai & Shogun (Rick and Morty) adult swim
Add a photo to this gallery
Retrieved from "https://powerlisting.fandom.com/wiki/Archetype:Ronin?oldid=1713442"
Community content is available under CC-BY-SA unless otherwise noted.