Uranus/Ouranos (Greek Mythology) Personification and God of the Skies, the Heavens, the Weather, Divine Power and King of the Protogenoi Gods.

Father Sky, as the very entity itself or it's current host so named Sky Father.

The archetype for the characters that possess or have traits of a Sky Father. Advanced version of Sky Deity. Combination of Father God, Heaven Deity and Sky Deity. True counterpart to Earth Mother.

As an archetype, the Sky Father, personification/entity of make up the sky and the heavens, and are conceived as reigning over the other deities, which makes them normally one of the more powerful if not the most powerful deities in their respected pantheons. Many are literally fathers of most of the younger generations of the Pantheons of which they are apart.

Sky Fathers are also usually paired with Earth Mother Goddesses, acting as their balancing counterparts. However Sky Mothers are rarely heard of in mythos with only a small few being mentioned like the Egyptian Goddess Nut.

Chesed (Promethea) is a the part of the Immateria where matter begins to solidify into the material world, symbolic of the sky and where all Sky-fathers come from.

Gwyn, Lord of Sunlight/Cinders (Dark Souls), ruler of Anor Londo and all of the gods that hold dominion there. 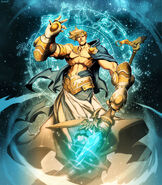