Nakime's (Demon Slayer: Kimetsu no Yaiba) Blood Demon Art grants her the ability to create and have absolute control of every property of a fortress of an infinite scale.

"That's odd. Usually the blood gets off at the second floor."
― Charles Montgomery Burns (The Simpsons)

The power to manipulate architectural structures. Variation of Object Manipulation.

The user is able to plan, design, create (usually from matter but also energy), shape and manipulate buildings and other forms of architecture, from the macro-level (urban design, landscape architecture) to the micro-level (construction details and furniture), including bridges, dams, apartments, monuments/memorials‎, windmills, houses, homes, school, etc., and manipulating/shaping, combining/separating, etc. every part of them as needed, moving them with telekinesis, etc. 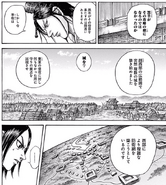 ...after declaring war on the state of Qin, he created an elaborate multi-layered defense of castles and forts throughout the formerly empty western parts of Zhao...

...and intentionally modified the strategically important Retsubi, with hidden faults that make it difficult to defend for its conquerors.
Community content is available under CC-BY-SA unless otherwise noted.
Advertisement