The power to use magic related to the Arctic. Form of Magic. Variation of Arctic Manipulation and Environmental Magic.

The user can perform a form of magic related to Arctic, Antarctic and/or tundra regions. They can magically manipulate the region's components and/or channel their mystical energies. 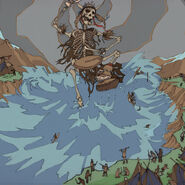 Ahkiyyini's (Inuit Mythology) drumming and dancing can cause Arctic waters to swell, surge and drown victims.

The Medicine Woman (The Simpsons Movie) appears in an aurora to guide Homer on his journey.
Add a photo to this gallery
Retrieved from "https://powerlisting.fandom.com/wiki/Arctic_Magic?oldid=1076419"
Community content is available under CC-BY-SA unless otherwise noted.