"Phenom is on his feet again, a little wobbly but still game. He's got his hands up, blades extended. Either of those things might take my head off like a dandelion."
― Dr. Impossible, Soon I Will Be Invincible

The ability to wield arm-blade weaponry with great skill. Variation of Weapon Proficiency.

The user demonstrates a great aptitude for arm-mounted blades. They can wield arm-blades with great skill in hand condition, agility, and moderate attack power.

See Also: Blade Below the Shoulder. 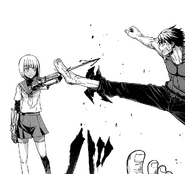 Dinoponera (Arachnid) is equipped with a pair of retractable elbow needle gauntlets, laced with bullet ant venom, that she wields with deadly ferocity.

The Hidden Blade (Assassin's Creed) is the trademark weapon of the Assassin Order.

arm-mounted blades are among the many trademark weapons of the Predator race (Predator/Aliens vs. Predator).

Snow (Marchen Awakens Romance) can use her Ice Ring to turn her hand into a blade of ice. Through her training with Ginta, she has learned to wield the blade at a proficient level.

Each of the Flat Sisters (Marchen Awakens Romance) possesses the Ghost ÄRM, Scalpel, which allows them to turn their hands into blades at will.

Kakkō (Naruto) using a pair of retractable wrist blades as his main weapons. 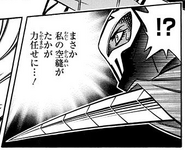 Hitsugi (Gintama) is equipped with a pair of wrist blades that he wields with tremendous skill and force, easily splitting a man in two.

Cole MacGrath (inFAMOUS) can generate blades of pure electricity around his arms to slice his opponents.

Issei Hyodou (Highschool DxD) can combine the holy sword Ascalon and his Boosted Gauntlet as powerful melee weapons.
Add a photo to this gallery
Retrieved from "https://powerlisting.fandom.com/wiki/Arm-Blade_Proficiency?oldid=1527307"
Community content is available under CC-BY-SA unless otherwise noted.