Alphonse Elric (Fullmetal Alchemist) can use alchemy to reconstruct his armor body.

User can repair their broken armor via Elemental Transmutation, Magic, Physical Restoration or by simply transmitting their life force particles (magical or spiritual) into a part of the armor via Infusion. 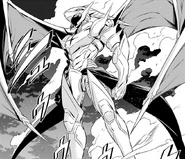 Demon Armor: Incursio (Akame ga Kill!) gained the ability to regenerate its own armor after evolving.

Zakat (Needless) creates an stone armor that can regenerate instantly by the use of his fragment, Felsen Avalanche.
Add a photo to this gallery
Retrieved from "https://powerlisting.fandom.com/wiki/Armor_Regeneration?oldid=1356910"
Community content is available under CC-BY-SA unless otherwise noted.