AMAZO (DC Animated Universe) is an artificially created android who became a god-like being by endlessly evolving its abilities.

Have an artificial deity powers.

"I have evolved far beyond what I was when we last met. You do not want to challenge me."
― A.M.A.Z.O (DCAU)

The ability to have powers of an artificial deity. Variation of Science Attuned Physiology. Not to be confused with Transcendent Mutant Physiology.

The user possesses the powers of an artificial deity, that may not be bound by natural laws or limits of regular gods due their artificial nature.

The Reincarnation of Rao (DC Comics) was an unstoppable creation of a possessed Kryptonian named Jax-Ur which absorbed any energy sent against it and used the energy to grow and increase its physical power. 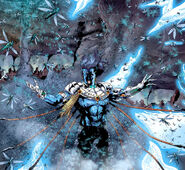 Krishna (Supergod) is a man-made god from India designed to modify the country's environment at will, upgrading the infrastructure, and improving the entire country

After her body is exposed to high amounts of CPH4, Lucy Miller (Lucy) slowly evolves until she ascends into a higher plane, becoming one with the universe.

After transferring his mind into a computer, Will Caster (Transcendence) has achieved a form of godhood through artificial intelligence.

Ragnarok (Valkyrie Crusade) is a man made WMD machine deity, created to defy the gods.
Add a photo to this gallery
Retrieved from "https://powerlisting.fandom.com/wiki/Artificial_Godhood?oldid=1499747"
Community content is available under CC-BY-SA unless otherwise noted.