After losing his left arm to the Shinsengumi, Oboro (Gintama) replaced it with a robotic one, allowing him enhance his fighting style.

Possess at least one artificial body part that grants enhanced capabilities with that particular limb.

The ability to possess at least one artificial body part that grants enhanced capabilities. Variation of Equipment Usage.

The user possesses at least one artificial limb that has a variety of functions and enhancements. The parts can be technological, magical, or both.

Shizuri Mugino (A Certain Magical Index) accidentally blew her own left arm and right eye off, so she created a makeshift ones out of her Meltdowner energy before replacing it with a robotic ones.

Seryu Ubiquitous (Akame Ga Kill!) obtained artificial arms prior to her bifurcation, carrying the ability to attach various weapons and a radar to them. She also carries other modifications such replacing her tongue with a gun and an explosive device attached to her skull. 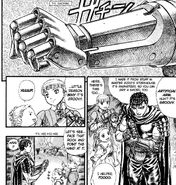 After she was forced to amputate her own left arm to help get away from King Bradley (Wrath), Lan Fan (Fullmetal Alchemist) later received an automail arm as a replacement.

Umibozu (Gintama) lost his left arm to his son Kamui, and his right to Utsuro, so he eventually replaced both with mechanical prosthetic that can turn into cannons.

Kiru (Karakuri) has a Mechanism as his right arm, allowing him to inject liquid methane into his victims, and then controlling the pressure and temperature to cause them to explode.

After his real arm was cut off by Danna, Phantom (Marchen Awakens Romance) had it replaced with a zombified and much more powerful arm.

Chiyo (Naruto) replaced her left arm with a puppet's, allowing her to install a Mechanical Light Shield Block into it.

Obito Uchiha (Naruto) lost his right arm during the Third Shinobi Great War, so Madara replaced it with the mutated substance from White Zetsu.

Madara Uchiha (Naruto) takes White Zetsu's mutated substance-arm as a replacement to his missing one, simply by linking it at the stump.

Naruto Uzumaki’s (Naruto/Boruto) right maneuverable prosthetic arm is made of Hashirama Senju's cells which he received after his original arm was lost from his final battle with Sasuke.

Franky (One Piece) has two bionic arms which are installed with a variety of scientific weaponry such as machine guns, rocket launchers and laser beams.

Shiki (One Piece) replaced both his legs with swords after cutting them off during his escape from Impel Down. 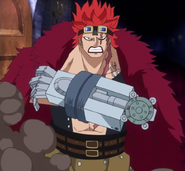 Mukuro (Yu Yu Hakusho) suffered such extensive damage when she poured acid onto herself that her right arm has been replaced with a mechanical one, which allows her to slice through space.
Add a photo to this gallery

Lex Luthor (DC Comics) had an artificial hand after losing his real one to radiation poisoning from a Kryptonite ring.

Bunnie D'Coolette (Sonic SatAM/Archie's Sonic the Hedgehog), had about half of her body roboticized, granting her mechanical body components of enhanced strength.

After he nearly got killed by Bebop and Rocksteady, Donatello (IDW's Teenage Mutant Ninja Turtles) received an artificial metallic-based turtle shell as a replacement for his original due to it being broken.
Add a photo to this gallery

Peter Pettigrew (Harry Potter) was given a magical silver prosthetic hand by Voldemort, replacing the one he severed, but programmed it to strangle Pettigrew for any signs of treason.

During his time as prisoner of the Patriots, Raiden (Metal Gear) was used as a test subject for experiments in exoskeletal enhancement surgery, during which his head and spine were excised from his body from his lower jaw down and grafted into an enhanced synthetic body. 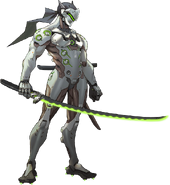 As Genji Shimada's (Overwatch) injuries left him barely clinging to life, Overwatch offered to rebuild his body in exchange for his help. He was put through an extensive process of cyberization, which enhanced his natural speed and agility and augmented his superlative ninja skills.

Camille (League of Legends) requested hextech augmentation to push her power beyond human in the form of bladed legs, grapple-spindled hips, and other, minor hex-augmentations.

Urgot (League of Legends) found the parts of his body that were weakest, and replaced them with scavenged machinery, technology created by those who would die without it.

Nero's (Devil May Cry) Devil Bringer arm was ripped from him by a weakened Vergil to reclaim his lost sword. His partner Nico replaces it with special prosthetic arms called Devil Breakers in its stead, with each arm possessing a special ability fueled by various demonic powers.
Add a photo to this gallery

10 Interesting Facts About Darth Vader's Suit You Didn't Know - Star Wars Explained
Add a photo to this gallery
Retrieved from "https://powerlisting.fandom.com/wiki/Artificial_Limbs?oldid=1654000"
Community content is available under CC-BY-SA unless otherwise noted.