Use the traits of an ascended demon.

"I am no longer the darkness. I will find my way in heavens light, I'll touch the stars all through the night I'll rise, rise, this time I'll mystify, I'll kill the black star of sin."
― The Enigma TNG - Lucifer's End

"Well, lets hear from angel Moe."
"I am Angel Moe."
― Moe Szyslak and his shoulder devil-angel (The Simpsons)

The user either is or has the power to transform into an ascended demon, demons that have either committed virtuous actions which caused them to ascend from disgrace through exhilaration, were purified by unnatural causes, rebelled against Hell or were exalted by Divine/Transcendent causes. It should be noted however that Ascended Demons aren't necessarily good, but most of them can be neutral or evil depending on their personality traits and actions.

Like fallen Angels, a demon’s wings and horns will either start to change from black to pure white and their demonic powers will wane significantly, although stronger demons can still retain their demonic abilities, even if it’s minimal, if they'd been purified by pure divine sources or committed virtuous acts that thus caused them to ascend from moral/unethical disgrace.

In medieval legends, Merlin (Arthurian Folklore) was a cambion born from a human mother and demonic father, who was baptized at birth to remove all evil within him.

Once one of the cruelest vampires in recorded history, Spike (Buffy the Vampire Slayer) rose from disgrace due to his love for Buffy Summers, voluntarily regaining his human soul.

Veronica (Dark Angel The Ascent) was a pure-hearted demon capable of pure love who punishes evil as means of divine retribution to all the unrepenting evildoers. Even heaven itself saved and allowed her to stay on earth with her beloved.

Sparda (Devil May Cry) had started out as a regular Demon, but after he blatantly rebelled against his former leader Mundus and his demonic forces, he consequently ascended from disgrace in wanting to protect humanity. 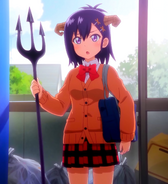 Vignette (Gabriel Dropout) although she is a demon, she is a pure-hearted witch made by god himself, sending his blessing upon her.

Even after being reincarnated as a devil, Asia Argento (High School DxD) remains a pure-hearted girl and devout nun, to the extent the archangel Michael granted her the ability to pray to God despite her demonic nature.

Even after being reincarnated as a devil, Xenovia Quarta (High School DxD) retained her good heart and devout Christian beliefs, allowing her to wield Holy Swords to no ill effect and eventually being granted the ability to pray to God.

Riichi Hourai (Because I Reincarnated as a Succubus, I'll Squeeze Out Milk) is a pure-hearted person despite being a Succubus.

Though he was meant to bring about the Apocalypse, the cambion named Hellboy (Hellboy/BPRD) was raised by humans and ascended from disgrace to become a heroic figure, being so pure that his spilled blood causes lilies to sprout.

Michael (The Good Place) is a demon who grew to love humanity greatly, in his experimentations gone wrong multiple times he grew better and better he eventually became the architect of the good place.

Lothraxion (World of Warcraft: Legion) was originally an ordinary Nathrezim that wanted to seek redemption.
Community content is available under CC-BY-SA unless otherwise noted.
Advertisement