Primal Zergs (Starcraft 2) can consume other life forms and assimilate their useful genetic traits into a more powerful form.

Digestively evolve into a powered state.

"Every living thing you consume makes you stronger. You take their shapes, and you take their memories."
― Alex Mercer to James Heller, Prototype 2

The ability to evolve by absorbing and consuming. Variation of Evolution.

The user can absorb organic biomass and gain the abilities, traits, attributes and physiologies of the being the biomass was from. They can assimilate in order to survive anything.

Aldrich, Devourer of Gods (Dark Souls III) is strongly implied to have assimilated the frail remains of Gwendoline, Nito and Priscilla, creating the form that he has now.

Cell (Dragon Ball Z) is able to increase in power by absorbing others...

...and obtained his perfect form by absorbing Androids 17 and 18.

Franmalth (Fairy Tail) can Evolve by absorbing the soul other beings. 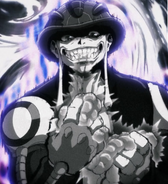 Meruem (Hunter X Hunter) consumes the flesh of a Nen user, assimilating their aura and powers.

Dehaka (Starcraft) is a notable Primal Zerg who can evolve by assimilation.

Kapellmeister (Marchen Awakens Romance) transformed into a demonic being after absorbing his own Ghost Chess henchmen.
Add a photo to this gallery
Retrieved from "https://powerlisting.fandom.com/wiki/Assimilative_Evolution?oldid=950716"
Community content is available under CC-BY-SA unless otherwise noted.