Project consciousness from the body.

"Oh no, this child is having an out-of-body experience. This is very bad for...business."
― Apu (The Simpsons)

"Like Mercury, I Slide From My Mortal Self and Dive Into...The Unknown."
― Doctor Strange (Doctor Strange: What's Is It That Disturbs You, Stephen?)

The power to project the consciousness of oneself or others from the body. Sub-power of Astral Manipulation. Lesser version of Material Astral Projection.

User can project/separate their consciousness/presence/spirit, alternatively known as their astral form, from their material bodies, allowing for perception, interaction and travel independent of physical limitation. This state is usually achieved through entering a trance (via lucid dreaming or deep meditation), with the user gaining access or influence over the Mental and Astral Planes, as well as potentially other planes of existence, which can extend so enough as to allow the user to move and exist outside the limits of space and time using their astral form. Experienced individuals may be able to control both their astral and corporeal presences, allowing them to extend and project their astral selves without having to lose consciousness in their physical forms, as well as separate others from their physical forms to either to travel alongside them or to imprison them in an incorporeal state. Telepaths often astral project by projecting their minds as well as that of others.

Jinora (Avatar: The Legend of Korra) in astral form.

Bayonetta (Bayonetta) can project her soul out of her body to fight opponents in Purgatorio while protecting someone in the physical realm.

By combining the active skills 【Spirit Form】 and 【Long-distance Control】, Vandalieu (The Death Mage Who Doesn't Want a Fourth Time) can astral project himself multiple times at once.

Davina (The Originals) in her spirit body

Charles Xavier and the Shadow King (Marvel Comics) cast their astral selves to duel on the Astral Plane. 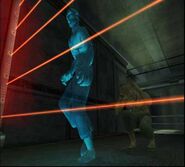 Kat (DmC: Devil May Cry) is able to astrally project into Limbo. 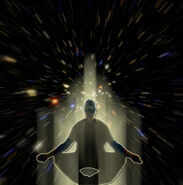 ...after the destruction of the twelve talisman, Bob became the noble sheep and inherited the sheep talisman power of Astral Projection.

The Dazzling/Sirens (My Little Pony: Friendship is Magic), convene astral versions of their true siren forms.

Over his two years of training, Brook (One Piece) discovered how to use his Yomi Yomi no Mi power to extract and project his soul from his body. 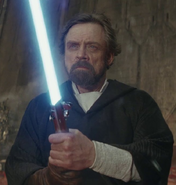 Luke Skywalker (Star Wars) using the Force to project a tangible image of himself across the galaxy.

Tokiko Fuuma (Taimanin Asagi) can use this with her Evil Eye ability.

After being buried alive by Gentleman Ghost, Batman (Batman: The Brave and the Bold) rises from his grave in astral form.

Salem (RWBY) using astral projection to appear as an apparition.

The Sorcerer (RC: 9GN) can use regular green Stank to create a giant astral projection of himself that shadows his moves. He can also create one in his Red Stank form but it takes a huge amount of concentration.