The power to record and recreate other's attacks. Sub-power of Attack Manipulation and Power Replication. Variation of Attack Replication.

Inaba (Bleach) is able to record and recreate the attacks of others with his Zanpakuto.

After being attacked by Yamcha's Kamehameha, Tien Shinhan (Dragon Ball) was able to nullify it...

Rufus Lore (Fairy Tail) can use his Memory Make magic to recreate and use any attack found "memorized". 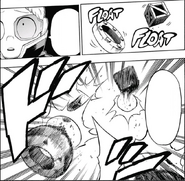 The Sharingan (Naruto) is capable of observing and replicating any ability on the fly.

Using Enemy Zero, Gyokuro Shuzen (Rosario + Vampire) scans monster powers and attacks using the eyes on her palms, recording them and making them her own.

Emerl (Sonic the Hedgehog) can observe and replicate any attack on the fly.
Community content is available under CC-BY-SA unless otherwise noted.
Advertisement