Meliodas (Nanatsu no Taizai) can use his ability Full Counter to reflect attacks aimed at him, back at the enemy, but with much greater power.

Turn an attack back on their user.

The power to turn an attack back on the attacker. Sub-power of Attack Movement Manipulation.

The user can reverse any attack (from long range attacks to melee) launched at them back at their opponent. Sometimes the attack reversed can become stronger, faster, or both.

Accelerator (A Certain Magical Index) reversing the vectors of all attacks against him automatically, causing them to strike the sender.

An Anodite (Ben 10) using her hair to toss back Gwen's mana attacks.

Nelliel Tu Odelschwanck (Bleach) using Cero Doble to absorbs an opponent's Cero, add her own power to it, and release it back at the opponent.

Jūshirō Ukitake's (Bleach) Sōgyo no Kotowari can absorb an opponent's attack and release it with a faster speed and more potency than it originally had.

Using Shiten Kōshun, Orihime Inoue (Bleach) creates a triangular shield that, at the very instant of receiving an attack, disperses the resultant force as a concentrated explosion which is automatically returned along the attack's opposing trajectory.

Nozomi Kujō (Bleach) using her Arazome Shigure to absorb spiritual energy and fire it back at her opponents.

Utah of the Mirror (Code:Breaker) using his Mirror to absorb attacks and reflect them back onto his enemies.

Using a Kiai, Tien Shinhan (Dragon Ball) is not only able to stop Yamcha's Kamehameha Wave in its tracks...

InuYasha (InuYasha) using Bakuryūha to use his Kaze no Kizu to envelop enemy attacks and send them back along with his own.

Typhoid Mary (Marvel Comics) uses her Telekinesis to give a Yakuza...

Bartholomew Kuma (One Piece) using his paw pads to bounce incoming attacks back at his opponents. 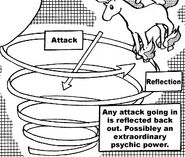 Mewtwo (Pokémon Adventures) using "Psywave" as a tornado to blow back attacks with amplified strength.

Guile Hideout (Pokémon Adventures) wielding the sword Instant that reflects attacks back to the attackers.

...and octomissiles by damaging them enough. However...

...DJ Octavio can use the Octobot King's fists to reverse the octomissiles back towards Agent 3.

Zatch Bell and Kiyo Takamine (Zatch Bell!) using Rashirudo to block an enemy attack and send it back, enhanced by electrical energy.

Dark Yugi (Yu-Gi-Oh!) using Holy Barrier - Mirror Force to reflect an enemy attack and destroy everything on the enemy's side.

Reflect Bounder (Yu-Gi-Oh!) reflecting enemy attacks back at the enemy, causing fatal backfire towards them.