"GET OVER HERE!!!"
― Scorpion, dropping his iconic catchphrase when using a hellish chain-tied spear, and doing just that. (Mortal Kombat series)

The power to pull objects. Sub-power of Attraction & Repulsion. Opposite to Repulsion.

The user can use various means (mental strength, magnetic force, etc.) to pull objects toward them.

Eustass Kid (One Piece) attracts and shapes scrap metal into a gigantic arm.

Marshall D. Teach/Blackbeard (One Piece) using Black Hole to attract everything around him. 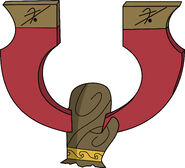 Glove of Jisaku (Xiaolin Showdown) can emit magnetized waves which attract objects
Add a photo to this gallery
Retrieved from "https://powerlisting.fandom.com/wiki/Attraction?oldid=1421813"
Community content is available under CC-BY-SA unless otherwise noted.