As the Aura Pokémon, Lucario (Pokémon) can sense auras.

Sense the presence of auras in one's vicinity.

The power to sense the presence of auras in one's vicinity. Sub-power of Aura Manipulation. Variation of Detection. Not to be confused with Aura Reading. Opposite of Aura Concealment.

User can sense the presence of auras and possibly gain detailed understanding about the auras they are sensing, including the amount/size of auras they are sensing and whether they are hidden. Sensing auras also allows the user to view surroundings even with a blindfold, and read the thoughts and movements of other beings by sensing the aura that they emit. 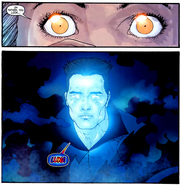 While in Sage Mode, Naruto Uzumaki (Naruto) can sense and track chakra auras.

A master of Kenbunshoku/Observation Haki, Issho/Fujitora (One Piece) uses his mastery to sense and even see auras.

After awakening his Kenbunshoku/Observation Haki, Usopp (One Piece) can detect auras from a far away distance.