Kyouka Amamiya (Not Lives) can manipulate the power and authority of the Game Master, granting her the exact same abilities as theirs and allowing her access to all controls of the verse as well.

"These...are the guys who control our destiny?"
"You think we control you?"
"Ha! You control us!"
"Our whole lives revolve around you guys."
― Robin, Aaron Horvath and Michael Jelenic (Teen Titans Go!)

The power to manipulate the authority of anything/everything. Ultimate version of Hierarchy Manipulation. Sub-power of Status Manipulation.

User can create, shape, and manipulate Authority, the power to enforce rules/laws, make decisions, and overall control/dominion of others. Allowing them to remove, change, or even create a new authority for anything/everything.

User can remove all the authority/control of a location leading to total anarchy, or change the command structure so that common folk have the same power as the god or ruler.

See Also: Rage Against The Author. 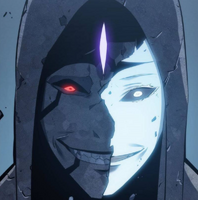 The Architect (Solo Leveling) is the creator of the Player System, which lets a chosen Awakened individual to grow similar to a Video Game in an attempt to create a host strong enough to ressurect the Shadow Monarch.

Sung Jin-Woo (Solo Leveling) was able to both attain the powers of the Shadow Monarch and also "devour" the System, thus taking control from the Architect who created it.
Add a photo to this gallery
Retrieved from "https://powerlisting.fandom.com/wiki/Authority_Manipulation?oldid=1698216"
Community content is available under CC-BY-SA unless otherwise noted.