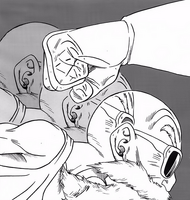 Due to his centuries of combat experience, Master Muten Rōshi (Dragon Ball Super manga) is able to access a state similar to Ultra Instinct.

...allowing him to face Goku's perfected Ultra Instinct form on even footing.

Crossbones (Marvel Comics)
Add a photo to this gallery
Retrieved from "https://powerlisting.fandom.com/wiki/Auto-Reflexes?oldid=1666891"
Community content is available under CC-BY-SA unless otherwise noted.