The ability to create automatons. Sub-power of Constructs Creation. Variation of Robot Creation and Object Creation.

User is able to create automatons: an ancient, artificially-constructed robot-like creatures that follow their creator's commands to the fullest. Automatons are considered to be the ancient mystical forerunners of robots. They usually appear to be a suit of metallic armor lacking functional internal organs & metabolism and immunity to almost all of the frailties that affect living organisms. Automatons are usually created by intelligent magic users.

The user is able to craft automatons that follow their commands to the letter. This is an ability quite similar to crafting golems. 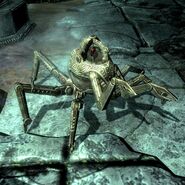 The Destroyer (Marvel Comics) is Asgardian armor, animated by magic. Inhabited by the lifeforce of a sentient being, its strength is immeasurable, great enough overpower the like of Thor and the Hulk.

The Annihilator (Justice League Unlimited) was an automated battlesuit created by Hephaestus. It was indestructible, self-powered, and gained strength from any enemy attack and from hate and anger.
Add a photo to this gallery
Retrieved from "https://powerlisting.fandom.com/wiki/Automaton_Creation?oldid=1692391"
Community content is available under CC-BY-SA unless otherwise noted.