Become the embodiment of autumn.

The power to become the embodiment of the autumn. Variation of Season Embodiment and Autumn Manipulation. Opposite to Spring Embodiment.

The user embodies and personifies Autumn, which allows them limitless control over the season and everything connected to it. The User has divine authority over the falling of leaves, cool breezes, and gentle, pouring rain. 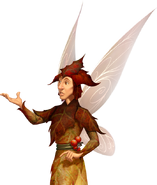 Cinder Fall (RWBY) became the Fall Maiden after stealing Amber’s powers.
Add a photo to this gallery
Retrieved from "https://powerlisting.fandom.com/wiki/Autumn_Embodiment?oldid=1695516"
Community content is available under CC-BY-SA unless otherwise noted.