Calypso (Valkyrie Crusade) has control over the sea fairies, lesser embodiments of the sea/herself.

The power to manipulate avatars. Sub-power of Non-Physical Interaction. Not to be confused with Embodiment Manipulation.

User can manipulate avatars/embodiments (people and things that embody something), thus changing what a person or thing embodies, thus potentially altering their personality as well. Though usually based around concepts (as well as emotions and elemental forces), not all concepts that can be embodied are extremely powerful, and even places and other things can be embodied. 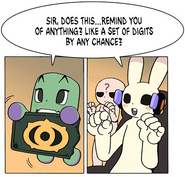