Mobius One (Ace Combat 04: Shattered Skies) was said to be worth an entire squadron by himself.

Have extraordinary skill in piloting aircrafts/spacecrafts

"The duty of the fighter pilot is to patrol his area of the sky, and shoot down any enemy fighters in that area. Anything else is rubbish."
― Baron Manfred von Richthofen

The ability to be extremely skilled in piloting aircrafts. Variation of Vehicle Intuition.

User possesses extraordinary skill in piloting aircrafts and are better than everyone else. They usually credited with shooting down several enemies during aerial combat and accounted for the majority of air-to-air victories in any battle/war.

Despite his young age, Miles "Tails" Prower (Sonic the Hedgehog) is an expert pilot. 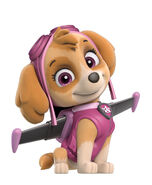 Peter Parker/Spider-Man (Marvel Comics) uses his spider sense to effectively pilot a jet.
Add a photo to this gallery
Retrieved from "https://powerlisting.fandom.com/wiki/Aviation_Intuition?oldid=1745139"
Community content is available under CC-BY-SA unless otherwise noted.