Blackagar Boltagon/Black Bolt (Marvel Comics) is one of fictional history's strongest user of this power.

The power to release sound waves of such an amplitude that objects will shatter, crumble, and explode. Combination of Sonic Scream and Explosion Inducement. Variation of Ultimate Sonics.

User can emit sound waves that can destroy objects, they may be able to target certain objects so that only they are destroyed. With enough power, a user of this ability could level entire cities with their power and at full strength, they could possibly destroy an entire planet, or even distort the fabrics of reality.

Super Buu (Dragon Ball Z) screaming so loud that he can create tears in dimensional boundaries. 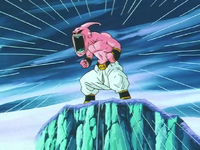 Kid Buu (Dragon Ball Z) screaming so loud, he can distort the weather and hurt even two Saiyan's ears. 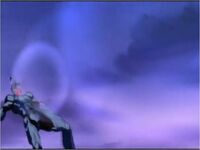 When he's upset or dismayed or accidentally injured, Mojaru (Mojacko) will cry but with a ballistic scream than can actually shake (or destroy) a planet.

Using the Ghostly Wail, Danny (Danny Phantom) emits an eerie banshee-like sonic shriek that can cause untold devastation to nearly everything that is human or ghost can withstand it.

Dark Danny (Danny Phantom) Ghostly Wail was able to destroy the future ghost shield, that withstood his other powerful attacks.

Black Canary (DC Comics) generates powerful sound waves capable of damaging, disorienting, and stunning anyone she uses it on.