Vampires can often transform into a swarm of bats.

User can disperse their body into a swarm of bats, scattering into large area while retaining control over their fragments instead of staying in relatively cohesive form and reforming from any part.

See Also: One to Million to One

Cole MacGrath (inFAMOUS: Festival of Blood) was turned into a vampire by Bloody Mary, so he is able to turn himself into a flock of bats.

Alucard (Castlevania: Lords of Shadow 2) is capable of transforming into a cloud of bats to get from one location to another quickly. 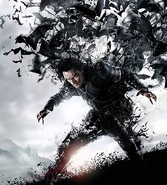 Kain (Legacy of Kain) can dematerialize and reform in bats
Add a photo to this gallery
Retrieved from "https://powerlisting.fandom.com/wiki/Bat_Swarming?oldid=1450013"
Community content is available under CC-BY-SA unless otherwise noted.