Hagoromo Otsutsuki/Sage of Six Paths (Naruto) created the Tailed Beasts from the chakra of the Ten-Tailed Demon.

"I gave life to the foulest of creatures and allowed them to run wild, taking what they wanted and destroying the rest. My reign was a glorious, fear-soaked epoch of darkness in Equestria."
― Grogar admitting that he created various monsters that roamed Equestria. (My Little Pony: Friendship is Magic)

The power to create beasts and monsters. Variation of Entity Creation.

User can create beasts and other extraordinary creatures to serve the one who created the beast. They can be a small companion to a powerful beasts like Dragons, Sphinx or demonic beasts. They can give birth to the beasts or generate them out of emotions (i.e. monsters made of fear, rage or envy). 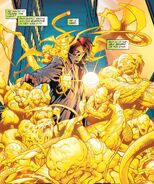 Alex Nero (DC Comics) can create an endless amount of monsters due to his derange mind and artistic skills.

Eve (Supernatural) is the Mother of All Monsters 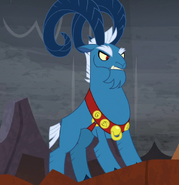 Grogar (My Little Pony: Friendship is Magic) holds reputation being the "Father of Monsters", having gave life to the foulest of creatures in the land that would become Equestria.
Add a photo to this gallery
Retrieved from "https://powerlisting.fandom.com/wiki/Beast_Creation?oldid=1387486"
Community content is available under CC-BY-SA unless otherwise noted.