Undergo a transformation into a beast form.

"Allow me to show you why they call me The Tailless Beast!"
― Kisame Hoshigaki (Naruto)

The power to undergo a transformation into a form with beast-like abilities, powers, skills, and traits. Variation of Mode Switching.

The user is able to enter a state which allows beast-like abilities, skills and traits with bestial capabilities and powers that transcend all of the user's basic limits whether physical, spiritual, mental and so on. 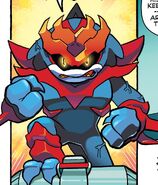 As a member of Zarbon's race, Yuzun (Dragon Ball Super) is also capable to adopt a monster form.

Elfman (Fairy Tail) can use Take Over magic to turn into different types of beasts. 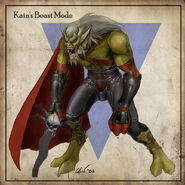 Due to the compensation of the Darkness ÄRM, Finsternis, Saturn (Marchen Awakens Romance) transformed into a giant beast when the ÄRM was destroyed.

Under the full moon, Minks such as Carrot (One Piece) can give in to their true bestial nature, massively increasing their power at the risk of becoming feral.

Saki Amamiya (Sin and Punishment) in his Ruffian form.

Males of Cosmo's species (Sonic X) can assume a more monstrous form referred to as Mover Mode.
Add a photo to this gallery
Retrieved from "https://powerlisting.fandom.com/wiki/Beast_Mode?oldid=1565665"
Community content is available under CC-BY-SA unless otherwise noted.