As a form of punishment, Athena/Minerva (Greco-Roman Mythology) could turn humans into hideous monsters.

Turn others into monsters

The power to turn others into monsters. Sub power of Transmutation. Variation of Conversion.

The user is able to transform other people into monsters, cryptic beings and/or mythical beings/beasts, effects can be permanent or temporary depending on what level of power the user is. The user can reverse the effect if they so choose to.

Ivanna Robotina (Archie's Sonic the Hedgehog) operates by monsterizing her victims like Dr. Robotnik roboticizes his own.

Escargoon's (Kirby: Right Back at Ya!) Insta-Monster-Mixture can turn any creature into a monster.

Circe (Greek Mythology) could turn others into monsters using potions

Eve (Supernatural) is capable of turning humans into monsters with only a touch, and even turn them into a hybrid of monsters 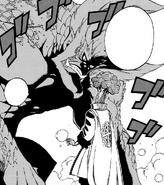 For a hobby, Chimera (Marchen Awakens Romance) keeps a collection of women she's mutated into monsters with Ghost ÄRMs.

The compensation of the Darkness ÄRM, Finsternis (Marchen Awakens Romance) is that if the ÄRM is destroyed, it will turn the user into a monster.

Monster Cells (One-Punch Man) that can transform humans into Monsters/Mysterious Beings by eating.

The Muur Talisman (Star Wars Legends) is a Sith artifact that allows its owners to transform any sentient creature, with the exception of force-sensitive beings and a few alien species, into mindless Rakghouls and control them as their obedient slaves.

Chernabog (Fantasia)
Add a photo to this gallery
Retrieved from "https://powerlisting.fandom.com/wiki/Beast_Transmutation?oldid=1570879"
Community content is available under CC-BY-SA unless otherwise noted.