"Good actions give strength to ourselves and inspire good actions in others."
― Plato

"(reading) Until gods grow good."
"Could be quite a wait."
― Atreus and Mimir after reading some runes (God of War)

The ability to release the benevolent aspects and altruistic essence of others. Variation of Charity Inducement. Opposite to Malevolence Release.

The user can release the benevolent aspects and altruistic essence of another being and essentially "purify" them by having them give in to their most benevolent desires. The user brings out the best in sentient beings and can turn them into benevolent beings. 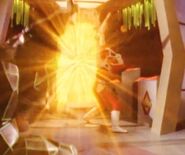 ...and thus releases an energy wave that disintegrates several evil beings while purifying several others, turning them into benevolent entities.
Add a photo to this gallery
Retrieved from "https://powerlisting.fandom.com/wiki/Benevolence_Release?oldid=1342017"
Community content is available under CC-BY-SA unless otherwise noted.