Captain Hina (One Piece) gained the power to create iron shackles from eating the Ori Ori no Mi.

The power to bind, imprison or otherwise stop targets. Opposite to Freeing.

User is able to bind, imprison, paralyze and/or otherwise stop targets moving normally and possibly completely freezing them where they were. Can be achieved using various means including energy-based or physical restrains or mental effects.

There are several different ways for binding someone:

Rukia Kuchiki (Bleach) uses Bakudō # 1. Sai to bind Ichigo's arms behind his back.

Byakuya Kuchiki (Bleach) using Senkei: Senbonzakura Kageyoshi to create a dome in which is comprised of all the blades of his Zanpakuto and prevents his targets from getting far. 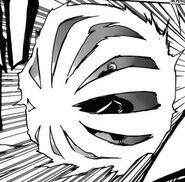 Quilge Opie's (Bleach) unbreakable Reishi cage can imprison all except a fellow Quincy, living up to the name "The Jail"...

... or use Reishi to forcefully seal up dimensional pathways like the Garganta.

Dark Danny (Danny Phantom) binds his former loved ones and teacher with ectoplasm. 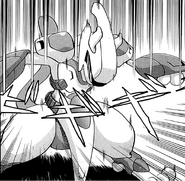 The M2 Bind armor (Pokémon) lives up to its name to bind Mewtwo and sap it of its energy.

Thanks to the Beads of Subjugation around his neck, Kagome Higurashi (InuYasha) can subdue and restrain Inuyasha at any time by simply telling him to "sit." 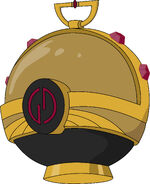 The Sphere of Yun (Xiaolin Showdown) traps the opponent in an impenetrable prison even can be used on the user for protection.

Yugi Muto (Yu-Gi-Oh!) using the Spellbinding Circle to bind Slifer, if even for only one turn.

Kaguya (InuYasha) binds Inuyasha to a wall with vines.

Metamorphia (Sonic the Comic) becomes a net to bind Sonic.

Hina (One Piece) phasing a pirate through her arm to restrain him with her Ori Ori no Mi ability.

Charlotte Perospero's (One Piece) candy is strong enough to even bind and hold down the superhuman children of the Vinsmoke Family.

As an ice manipulator, Snow (Marchen Awakens Romance) once imprisoned herself in ice to protect herself from the Chess Pieces.

Using his ÄRM, Phantom Glass, Phantom (Marchen Awakens Romance) can imprison people in a mirror. If the mirror breaks, the person inside breaks along with it.

Magical Roe (Marchen Awakens Romance) used his magic to imprison Snow in a ball and deliver her to Diana.

Gwen Tennyson (Ben 10)
Add a photo to this gallery
Retrieved from "https://powerlisting.fandom.com/wiki/Binding?oldid=1390836"
Community content is available under CC-BY-SA unless otherwise noted.