The power to manipulate all bio-electric energy fields with one's bio field. Sub-power of Bio-Element Manipulation and Bio-Electromagnetic Manipulation. Variation of Electricity Manipulation.

Electro (Marvel Comics) possesses the ability to bodily to generate electrostatic energy which he can release or harness for a number of effects. 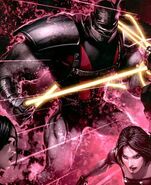 Using the Art of Inazuma, Ryu Hayabusa (Ninja Gaiden) concentrates his bio-electricity into a destructive blast.

Users of Ripple/Hamon (JoJo's Bizarre Adventure) can produce ripples of bioelectrical energy propagating from the bloodstream.

...enough to generate an EMP potent enough to knock out power across the entire western US and Mexico...

...and overturn a vehicle with his Spin Dash.

Bodies of the Flash (The Flash TV Series) and other users of the Speed Force generate high amounts of bio-electricity.

The Submariner (Marvel Comics) post golden age; could emit a bioelectric field similar to electric eels. Which he could use to penetrate Invisible Woman's force fields as well as defuse her visual imperceptibility.
Português do Brasil
Community content is available under CC-BY-SA unless otherwise noted.
Advertisement